The Revival of Myaamia Culture

The Miami Tribe of Oklahoma has a long history and new connection with Miami University in Oxford, Ohio. The Miami University Art Museum is holding their Myaamia Ribbonwork Exhibition until June 13th— the exhibition provides a historical context and background to the contemporary revival of ribbonwork among the Miami people. The artwork is part of an ongoing cultural revitalization led by the Myaamia Center.

The exhibition also corresponds with the 20th anniversary of the Myaamia Project within Miami University's Myaamia Center, who's mission is to deepen Myaamia connections within the University and the community. The project is a collaboration of both the Miami Tribe and Miami University in order to help revive a lost language and culture.

The relationship between Miami University and the Miami Tribe of Oklahoma has been going strong for over 40 years, and exists with a much longer historical context. In 1846 many Myaamia people are forcibly removed from their homelands in Oxford, to lands that later become Kansas. They were removed a second time to lands in Indian Territory which later became the state of Oklahoma. It wasn't until 1972 when Miami Tribe Chief Forest Olds visited Miami University unexpectedly, making the first connection. Since then, both the Tribe and the University have been connected through their commitments to education, research and learning. "Sharing a common name and place, the connection between the University and the Tribe has evolved into a multi-layered collaboration built on trust, respect, and a shared commitment to education," stated by their Miami Tribe Relations program.

The Myaamia Heritage Logo symbolizes this unique relationship and it's design also references the intricacy of traditional Myaamia Ribbonwork. The logo represents the connection between the Tribe and the University, their shared vision, and a deep respect for the reciprocal learning that results in their partnership.

The Myaamia Project was created in 2001 to further research and revive the lost Myaamia culture, as well as to support an educational partnership with the Miami Tribe of Oklahoma and provide ongoing support for Myaamia students at Miami University.

Today, Miami University currently has 32 Miami Tribe members enrolled as students. Each student is featured in a photo collage on display in the Myaamia Ribbonwork Exhibit. 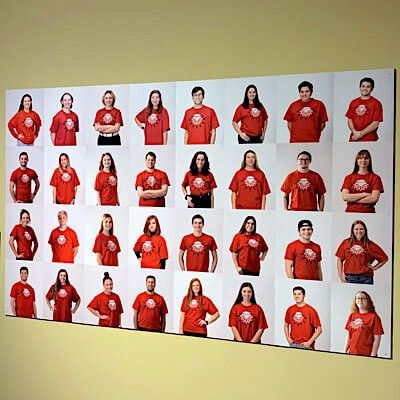 Karen Baldwin, a special projects researcher for the Miami Tribe’s cultural resources office, crafted a sash for Miami Tribe Chief Doug Lankford that is also on display in the Myaamia Ribbonwork Exhibit representing one of the more contemporary pieces. Before sewing the sash back in 2016, Karen consulted with tribe members and decided on two traditional patterns.

The left side of the sash lays over the heart and displays the Miami Tribe seal accompanied by the Myaamia words niila myaamia, meaning I am Miami. The right side of the sash displays the Miami University seal accompanied by the Myaamia words kiiloona myaamiaki — We are Miami. Myaamia students who are graduating now also receive a special graduation stole to wear at the commencement ceremony. 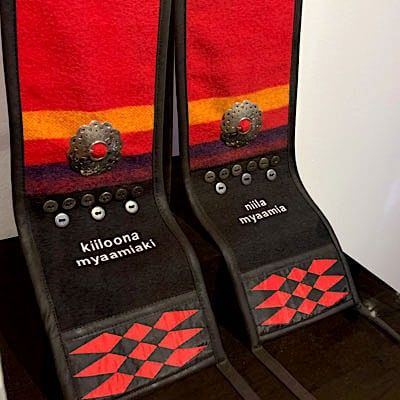 Over the years, the center has received awards for its pioneering work in cultural and language revitalization. A large part of this revitalization has been connected through art as well. "It's been a lot of work the Myaamia Center has done to revitalize the language and out of that came the revitalization of the art form," says Jason Shaiman, the Art Museum's Curator of Exhibitions.

The art form of Myaamia Ribbonwork consists of the layering, weaving, cutting and folding of ribbons into complex, beautiful geometric designs. The moccasins below are another contemporary piece in the exhibition, created by artist and Miami Tribe member, Scott Shoemaker. 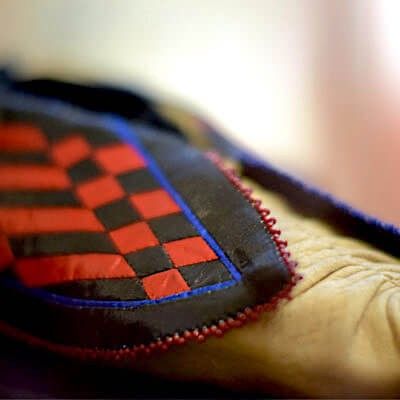 "My interest in learning ribbonwork coincides with my involvement in the revitalization of the language. Ribbonwork has many parallels with our language in that it is an expression of ancestral knowledge, has suffered a period of dormancy, was scattered to places far away from our community, has been brought out of dormancy, and is one again part of how we are as myaamiaki (Miami people)," Scott says in the Miami University Art Museum's Spring magazine.

The exhibition held at the Miami University Art Museum is an interactive and detailed display of both contemporary and historical pieces. The curated exhibit is a collection of 22 pieces — some borrowed from major collections from major museums like The Smithsonian, and others are original contemporary pieces made in this new revitalization era. In addition to the ribbonwork, the exhibit also includes videos, portraits and other pieces that coincide with either the historical significance or the revival of Myaamia.

The exhibit contains four different themes that provide a different perspective in viewing all of the pieces together. Each theme has its own dedicated area in the gallery and is also color coordinated. 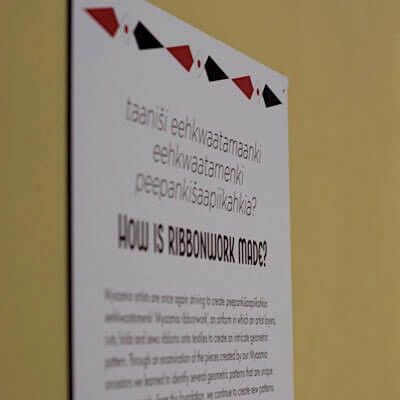 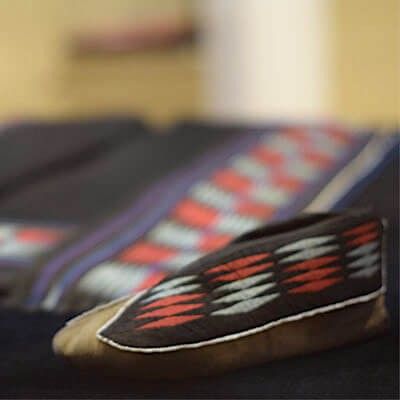 Some of the pieces in this exhibition are extremely rare and come from different collections all over the world. There is also a matching pair moccasins and leggings (above photo) from the Bata Shoe Museum that are on for the first time in a museum setting in the United States. 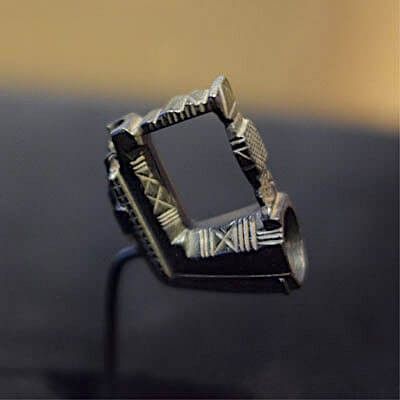 Several other pieces in the exhibition are on loan from the Smithsonian, like the ahpwaakana 'pipe bowl' pictured above. This exhibit brings extraordinary pieces from several collections all into one gallery for the first (and very possibly the only) time in history. 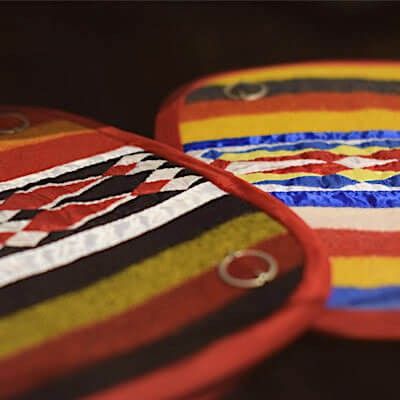 "The ribbonwork is one of the most important and visible art forms of the Myaamia people," says Jason. You can learn all about the great significance as well as the delicate complexity of ribbonwork at the exhibition from now until June 13th. The Art Museum has also highlighted some of these beautiful pieces on their Facebook page. 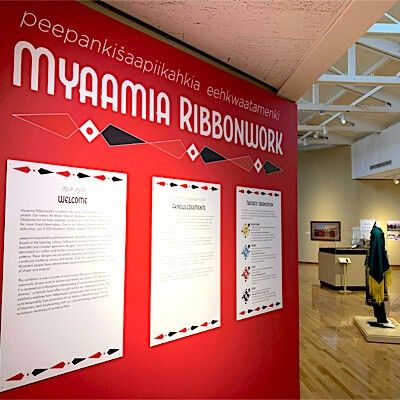