Ella Cope presented The Changemakers of Oxford mural on June 14, 2019. 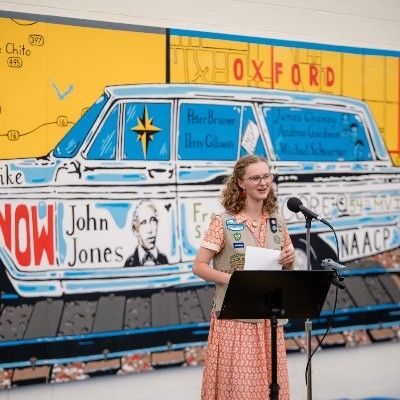 As a Girl Scout since she was about 10 years old, Ella Cope had to complete one last major project in order to receive the Girl Scout Gold Award— the highest honor in Girl Scouts. The one major criteria for the project is to leave a lasting, positive impact on their community. After 140 hours of work, a lot of planning, research, and paint later... Ella created a mural that does just that, and will continue to leave a positive mark on Oxford for years to come.

Back when Ella was in the 8th grade, her Girl Scout troop disbanded, but she continued on as a Juliette Scout. Over the years, Ella earned both her Bronze and Silver awards, so naturally the last step was to earn the Gold Award through an individual project. "I wasn't going to stop short of the finish line," she says.

As the most prestigious award that Girl Scout Seniors and Ambassadors can earn, the requirements are only that the project be individual, community oriented, and at least 80 hours worth of work.

"I knew that I wanted to create some piece of public art, because there's a lack of outdoor art around Oxford," Ella explains. "I knew it would be a bit of a challenge, but it was a huge project that I wanted and I had the Girl Scouts support." 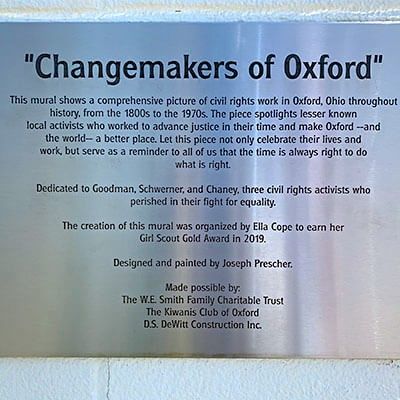 Ella and her family moved to Oxford when she was 8 years old. Up until then Ella had quite an interesting childhood, growing up on the Broadway Roadshow Phantom of the Opera, where both of her parents were members of the cast.

"I grew up near so much diversity and people of completely different backgrounds, so I grew up having a lot of value for people so vastly different than me," Ella says. "I think once you have that respect for people who are different than you, it translates into the change you want to see in the world."

That view on life helped inspire her original idea for the Changemakers of Oxford mural, which portrays a comprehensive picture of the civil rights work done in Oxford throughout its history from the 1800s to the 1970s.

As Ella put a lot of thought into her final Girl Scout project, she says she remembered a trip she took in the third grade. At the time she was homeschooled and she was working on a history assignment about your local community's history, so her dad took her to the Freedom Summer Memorial on Miami University's campus here in Oxford.

"It's a part of Oxford's history that's not as well known. I decided I wanted to take that aspect of lesser known, yet important history and bring it into the spotlight," Ella explains. "You shouldn't have to be pursuing an academic project to be aware of your local history." 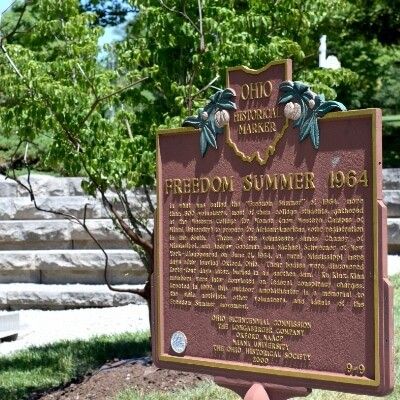 The Freedom Summer Project, also known as the Mississippi Summer Project, was a volunteer campaign in launched in June 1964 to attempt to help register Black voters in Mississippi, which at the time was a very dangerous task due to the rise of Ku Klux Klan membership in Mississippi during 1964. The project included nearly 1,000 Black and White volunteers, many of them college students, who fought against voter intimidation and discrimination at the polls. The movement was organized by civil rights organizations like the Congress on Racial Equality (CORE) and the Student Non-Violent Coordinating Committee (SNCC). 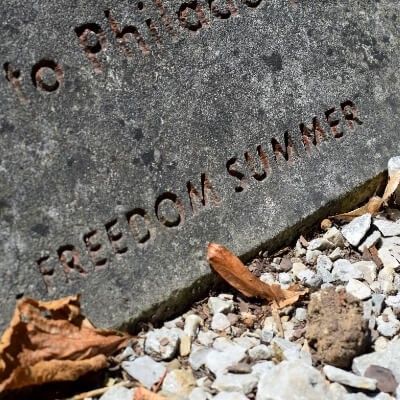 However, before going to Mississippi, volunteers spent time training at the Western College for Women here in Oxford. The training sessions were intended to prepare volunteers to register Black voters, teach literacy and civics at Freedom Schools, and approach hostile situations with non-violence.

The main focal point in the Changemakers of Oxford mural is a blue station-wagon. Painted inside the back window of the car are three important portraits, along with their names. 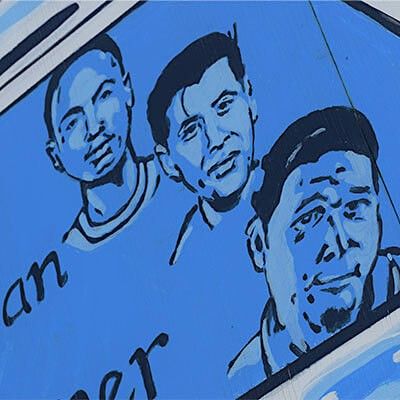 Three men— CORE Staff Members James Chaney and Michael Schwerner, and Freedom Summer Volunteer Andrew Goodman— were leaving Mississippi to investigate a church burning in Neshoba County, which had been a planned site for one of the Freedom Schools. The men left in a blue station wagon on June 21, 1964 and then went missing later that day.

A few days after their disappearance, the blue station wagon was found burned, off the road. The case of three missing men began to draw in national attention, in part because Schwerner and Goodman were both white Northerners. After six weeks of searching, the FBI uncovered the bodies of Chaney, Goodman and Schwerner on August 4, 1964— their murders were at the hands of the KKK. 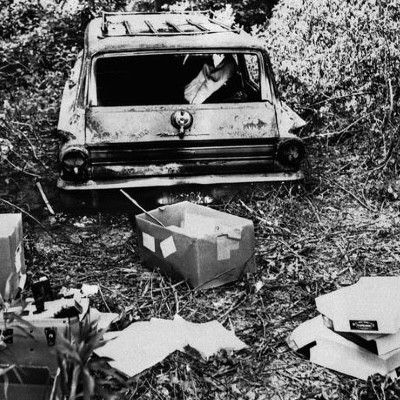 Chaney, Schwerner and Goodman were all passionate activists who truly believed in the work they were doing and hoped to help make a difference. Their murders are often remembered as an extremely difficult, yet pivotal point in the Freedom Summer Project.

All in the Details

When looking closely at the mural, you can see just how many different aspects of civil rights history is represented.

The upper background of the mural shows both a map of Oxford, Ohio and Philadelphia, Mississippi— which is where Chaney, Goodman and Schwerner were murdered. In each wheel of the station wagon are other tributes to the organizations involved in Freedom Summer of 1964. Inside of the back wheel is the crest for the Western College for Women, where the training sessions took place. In the front wheel, you'll see the symbol for the Student Nonviolent Coordinating Committee (SNCC). 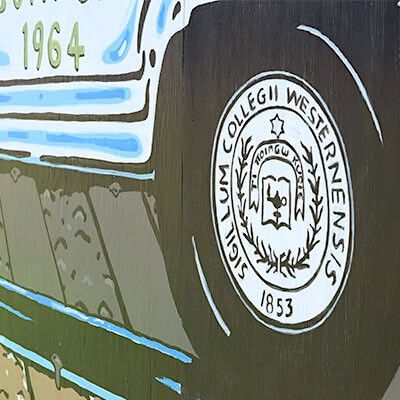 There is also significance to the railroad tracks on the bottom of the mural underneath the station wagon. It was important to Ella that the mural would be a comprehensive portrayal of the civil rights work done in Oxford, dating back to the 1800s, which included the Underground Railroad. In the middle of the station wagon is a portrait and the name John Jones. Him and his father, Jack Jones, helped to create what is considered the best documented Underground Railroad site in the Oxford area.

Together they helped enslaved people escape the South through Hamilton and up to the Quaker communities of West Elkton, Ohio, as well as Richmond, Indiana. 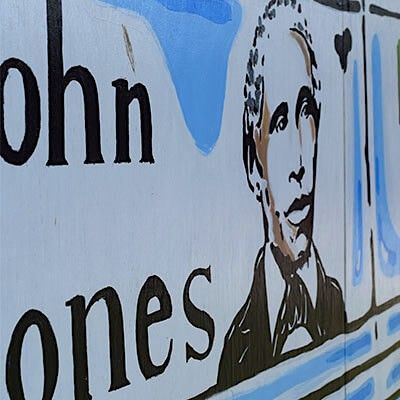 According to the family’s oral history, enslaved people would follow the Great Miami River north from the Ohio River all the way to Jack Jones’ home in Hamilton. From there, he would direct them to follow the railroad tracks that had been laid between Hamilton and Oxford. They would eventually find themselves at the farm residence of John S. Jones on Booth Road where they’d be given refuge before the next part of their journey.

Upon just looking at the Changemakers of Oxford mural, the bright yellow map and blue station wagon stand out the most. It's when you take a closer look at the details where you can truly admire all of the history, activists and organizations that are represented.

With so much significance and detail, the mural took around 140 hours of work— much more than Ella was required to complete for her Girl Scout Gold Award. All in all, the mural took just over one year to complete from start to finish. In September of 2018, Ella first presented her idea to the Girl Scouts, and it was in August of 2019 that she delivered her final report. Within that year's time, a lot of hard-work went into making the mural a reality.

"It was an extensive process to approve the idea, fundraise, acquire the right permits and go step by step to get it completed," Ella says. 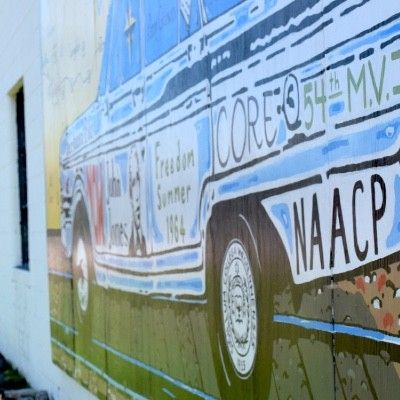 Although the bulk of work was done by Ella, she received a lot of help from the Oxford community as well. During her research, she was aided by Jacquline Johnson from Miami University as well as much help from the Smith Historical Libraries. Ella also applied and received two grants to help her with the project, including a $1,000 grant from the E. W. Smith Family Charitable Trust.

Before it actually became time to paint the mural, there were multiple other steps Ella had to take. A major task being to find the best location and acquiring the correct permits. The mural is located on the outer wall of Rittgers & Rittgers Law Firm on High St. in Oxford, directly across from the Community Arts Center.

"In the end I think the location worked out really well, the owner was so great to work with and I think it fits well being across from the Arts Center," says Ella. 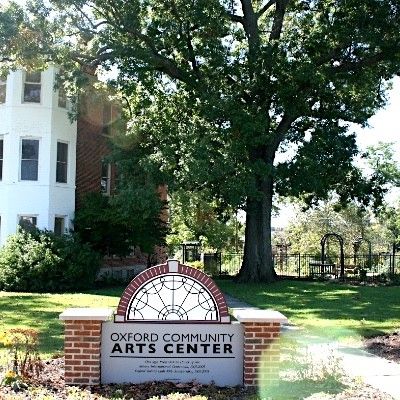 However, the wall where the mural is located is also facing an empty lot... which Ella knew would be inevitable for that space to be sold and possibility built upon and ultimately making the mural difficult to see. This led her to start brainstorming on how she could make the mural to be more easily relocated when the time came.

"I thought to myself, What do I have access to?...And I had access to some plywood," she says.

Uniquely, the Changemakers mural is 100% detachable by being screwed into the wall. The mural itself is painted on 6x8 wood panels on top of another panel of 2x4 wood. All together, the mural measures to be 8 ft. by 24 ft.

When the time came to finally get started painting, Ella gave her concept art to Joe Prescher, a member of the Oxford Public Arts Commission and he became the lead artist behind the mural. He took Ella's original idea and turned it into a digital design before the painting began. Ella and some of her friends, who were then Talawanda high school students, aided Prescher in completing the mural. 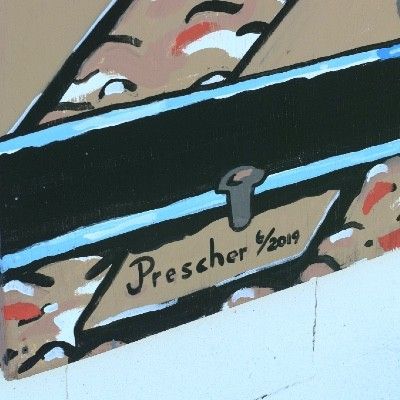 The year long process of planning, researching, designing and painting came to an end when Ella was able to present the mural to the Oxford community on Friday, June 14, 2019. Her presentation also became part of the art center’s second Friday Celebration of the Arts that year. Alongside Ella, both Susan Osborn— the Chief Operating Officer of Girl Scouts of Western Ohio— and Pastor Darryl L. Jackson of First Baptist Church also spoke at the event.

As for her future plans, Ella will be starting her freshman year at Ohio State University in the Fall of 2020, planning to major in Public Policy, Leadership & Management. "I can see myself doing a lot of different things, I'm just not sure what my angle will be yet," Ella says. 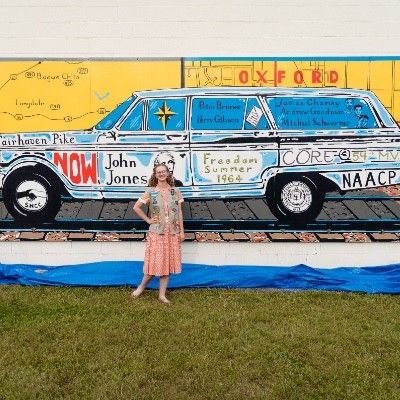 No matter where her future takes her, Ella succeeded in making a positive mark on her community. The Changemakers of Oxford mural will have a long-lasting impact for years to come.

"Once you know the significance in the mural, the station wagon is a great visual metaphor. It's the idea of forward motion," says Ella. "There is this constant forward motion and as long as the car is pointed in the right direction, and passengers keep getting in... we know we're doing the right thing."

Visit The Changemakers of Oxford Mural 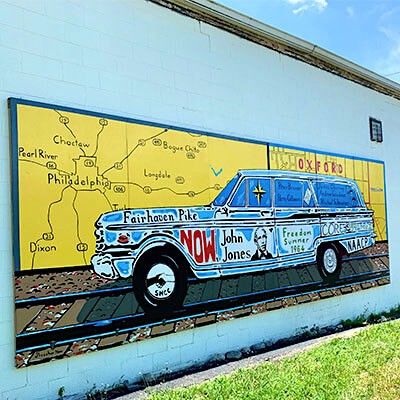