The Donut Trail has become a yearly tradition for newlyweds Will and Hannah. 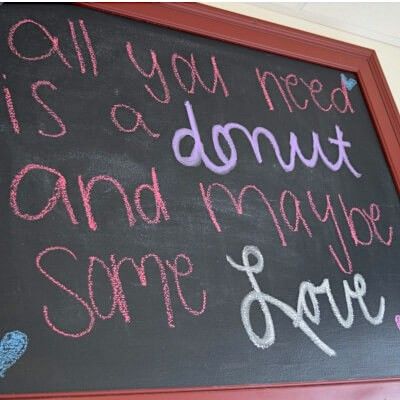 Back in 2018, Will and Hannah Griffin embarked on their first trip to Butler County, Ohio to complete the Donut Trail coming all the way from Dallas, Texas. Little did they know they would come back the following year to complete the trail for a second time...and then again for a third year while on their honeymoon! The newlyweds say they plan on coming back for their fourth trip in 2021 for what has become their Donut Trail tradition.

For the Love of Donuts

Will and Hannah first met a few years back through a mutual friend and coworker. The couple worked together for awhile and eventually their mutual friend began inviting them both to social events outside of work, including a weekend trip to Boston.

"We knew from that moment on that we both loved traveling and adventure, and we started dating shortly after that," Will says.

The couple also had another mutual interest... Donuts! Hannah first discovered the Donut Trail in 2018 through social media. Although the both of them have a love for donuts, Will says Hannah definitely loves them a little bit more. Since everyone knew Hannah was such an avid lover of donuts, she had multiple friends tag her in posts on the Donut Trail Facebook page. This gave Will the idea to surprise Hannah with a trip to Ohio. 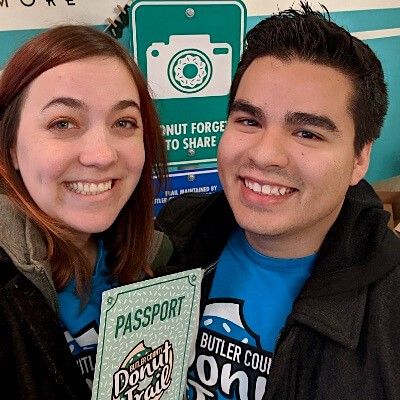 Hannah and Will on their second Donut Trail Trip in 2019.

"I had no idea where we were going when we left Dallas," Hannah says. "He didn't tell me until we got to the hotel so that I would be motivated to wake up early... He regretted it as I was ready to leave by 6:30AM the next morning!"

Overall, it took the couple about four hours to complete the trail. They met a lot of other Donut Trailers along the way and they kept running into the same people at the different shops.

"We loved getting to tell people we traveled all the way from Dallas just to eat donuts," Will says. "Little did we know that it would turn into an annual trip to Ohio!"

The Donut Trail is a fun adventure, but in order to visit all 13 shops in one morning... it requires some planning! The trail is ongoing so you can take as long as you would like to finish, but for those like Will and Hannah who are traveling quite a long way, it's a great idea to use the Donut Trail Map and plan out a route. 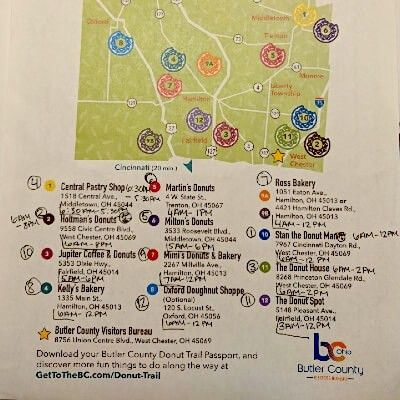 Will and Hannah's Donut Trail Map Route from their first trip in 2018.

"We put all the addresses into an online map tool to find the best route from our hotel. Since we’re both engineers we like efficiency," Will says. "We either print the list ahead of time from the Donut Trail website so we can mark the order we are visiting, or we use a hotel notebook to create a donut shop visiting list." 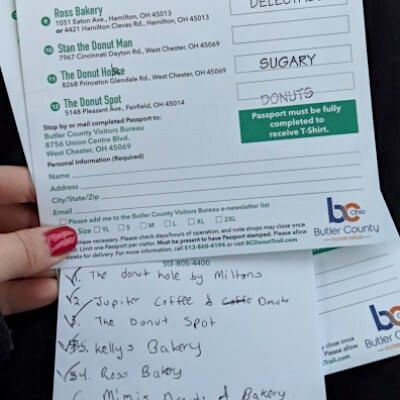 Will and Hannah's Donut Trail Passport and Donut Shop Visiting List from 2019.

After completing the trail three years in a row, you start to pick up on things! Here are Will and Hannah's top tips and recommendations for completing the Donut Trail... 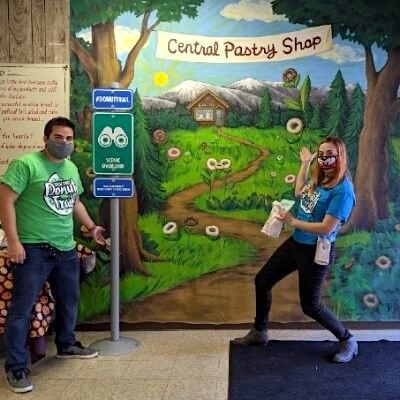 Will and Hannah at Central Pastry Shop on their most recent trip in 2020.

For additional tips while planning your Donut Trail adventure, check out the Know Before You Go blog, or call the new Donut Trail Concierge Line at (513) 860-0917 and a Donut Trail expert will be happy to assist you.

Oftentimes, the most difficult decisions along the Donut Trail are deciding which donuts to get! Of course everyone has their own favorites...

Hannah: "Glazed donuts and cinnamon glazed twists at Central Pastry Shop; glazed donuts at Jupiter Coffee and Donuts; apple fritters at The Donut Dude; glazed donuts at Mimi's Lil' Kitchen... I really could name all of them as I love all the donut shops on the trail!"

Will: "I love custard filled donuts and ones at The Donut Dude were spectacular! The chocolate iced donuts from Stan The Donut Man melt in your mouth, and the lemon meringue from Jupiter Coffee and Donuts were mouth-watering." 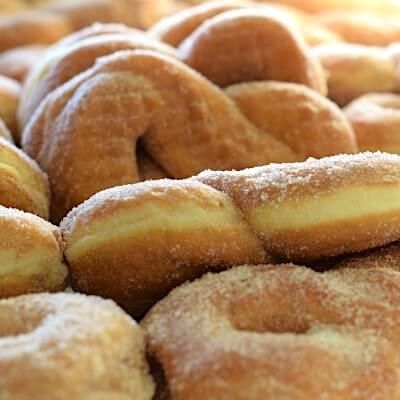 Honeymoonin' on the Donut Trail

Will and Hannah's most recent trip to complete the Donut Trail ended up being extra special, as they decided to come here for their honeymoon.

The Griffins dreamed of getting married in Colorado surrounded by friends and family, but as they got further into the year, they said they knew they needed to compromise and do something smaller. The couple decided to do a small church ceremony in August in Hannah’s parent’s backyard, and then just the two of them flew out to Colorado to get eloped on their original wedding date— October 12, 2020.

As their wedding plans shifted, so did their honeymoon plans. Originally, the couple planned to spend the Christmas Holidays in Scotland and Ireland.

"We started discussing different honeymoon options stateside. First we were going to just spend our whole honeymoon in Colorado and visit the Donut Trail in December," Hannah explains. "However, we decided to finish our honeymoon on the Donut Trail because we didn't want to wait until December for all of the donuts!" 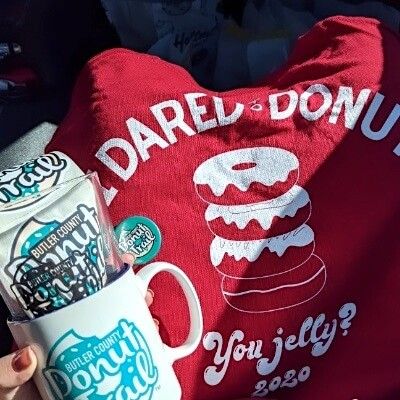 The couple completed the trail for their third time in October 2020 as a part of their honeymoon and earned their 2020 t-shirts to add to their growing collection. Hannah says the 2018 t-shirt will always hold a special place in her heart as it commemorates the first time they completed the trail... but the 2020 t-shirt is one of her favorites for the color and design.

"We love this experience every time we go and everyone is always intrigued by the story of the Donut Trail," She says. "This has turned into an annual tradition for us that we’ll continue for a long time!"

Special thanks to Will and Hannah Griffin for sharing their story & photos with us!