Mural, Mural on the Wall

There’s a certain magic that surrounds encountering murals. Blank walls around the country are being converted to vivid urban canvases. What was once an idea in someone’s mind, a sketch in a notepad, is now expressed as substantial eye-catching street art. Here are the spectacular murals that all have a unique story to tell in Butler County, Ohio.

This bright and bold color blocked mural is based off the iconic 1806 John Trumball portrait of the city’s namesake, Alexander Hamilton. The mural was designed by local professional artist and art instructor, Nicole Trimble. 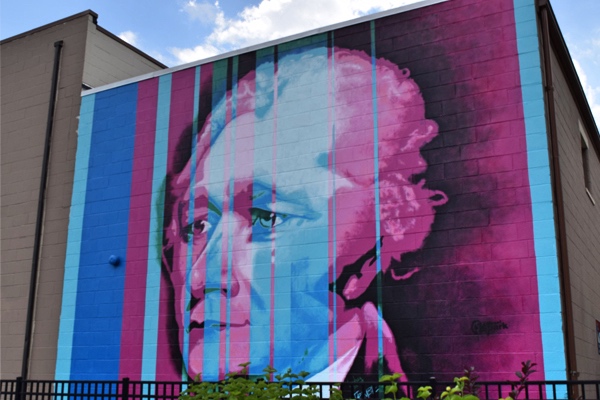 Right next door to True West Coffee. Enjoy a latte while you take in the view. 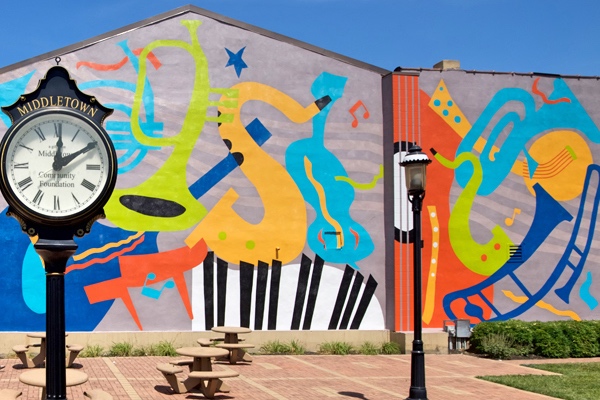 This musical mural can be found in downtown Middletown at the corner of Central Avenue and Broad Street.

This mash-up mural pays homage to Hamilton writer and illustrator, Robert McCloskey, and his books Blueberries for Sal, Make Way for Ducklings and Homer Price. The famous Homer Price doughnut machine churns out two-dimensional donuts next to a flock of ducklings and a couple of bears. 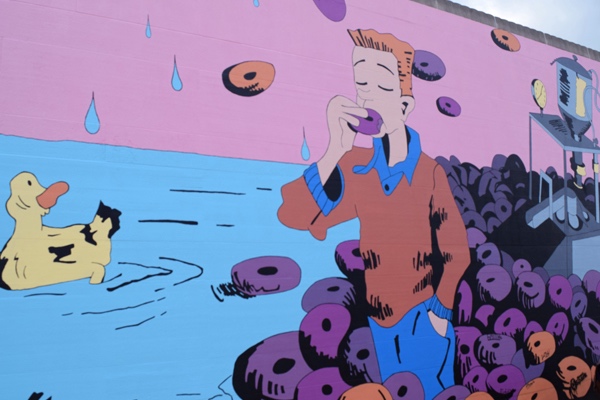 The Shetter Carnival Mural is a depiction of a photo taken in 1914 of the A B Shetter Carnival Sale on North Broad Street. Muralist, Eric Henn, brought this historic image back to present day. 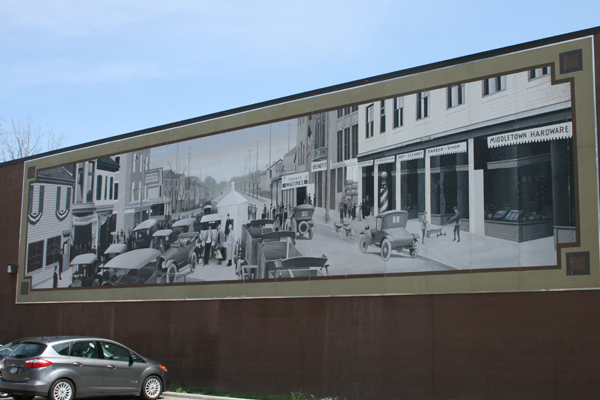 Find this history inspired artwork on the back of the YMCA building in Middletown.

Goddess of the Street Waters Mural

Find the Goddess of the Street Waters during your mural excursion! The lead artist brought her vision for Goddess, Oshun, to Butler County from Barracoa, Cuba. Oshun is a beautiful site you must see in person! 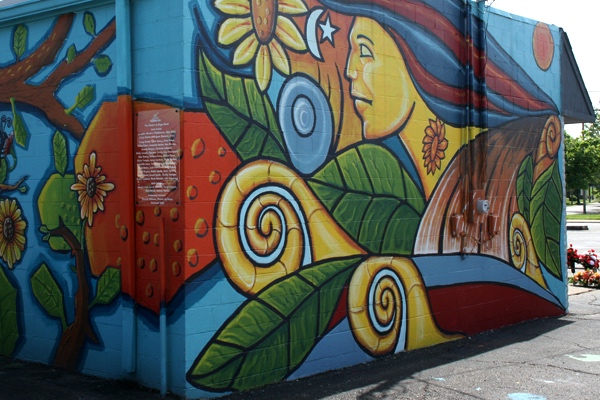 Look for Flowers by Roger. Two murals adorn the exterior walls of this florist. In addition to Goddess of the Street Waters, you’ll also see Cuban Landscape mural.

Remember muralist, Eric Henn, from the Shetter Carnival Mural? The Miami-Erie Canal mural is another piece painted by him. The mural stands to showcase life along the Miami-Erie Canal at Port Middletown. Next to the canal visitors can see a small-scale canal with locks. 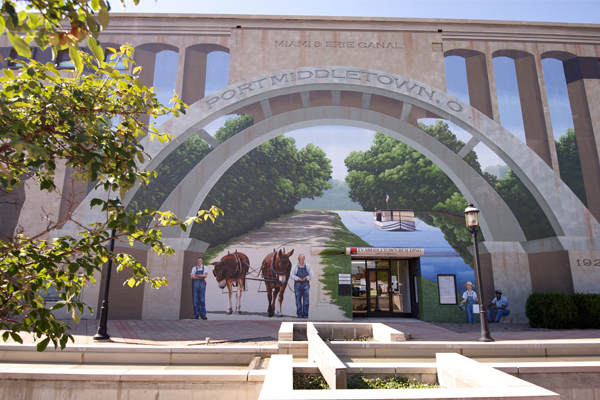 In downtown on the TV Middletown building.

These origami-style birds are meant to emulate the immense progress and new heights the city of Hamilton has reached. The scenic and relaxing Rotary Park rests in front of it. This mural was designed by Taylor Welch and painted by Nicole Trimble. 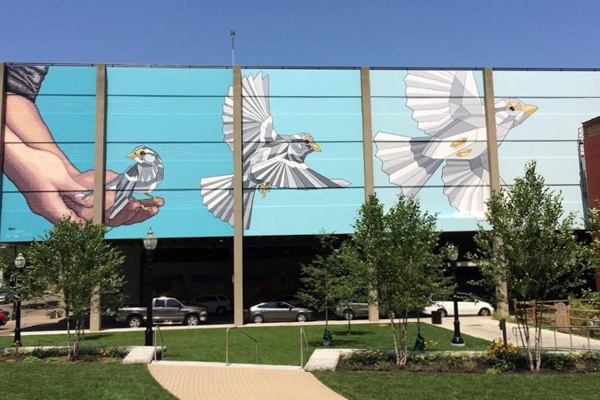 The Left Hander for Live depicts legendary Hamiltonian, Joe Nuxhall. He excelled both personally and professionally. In the height of his career, he was a well-respected pitcher for the Cincinnati Reds. Later on, Nuxhall became a philanthropist and a popular community activist. This striking composition was designed and painted by Paul Loehle. 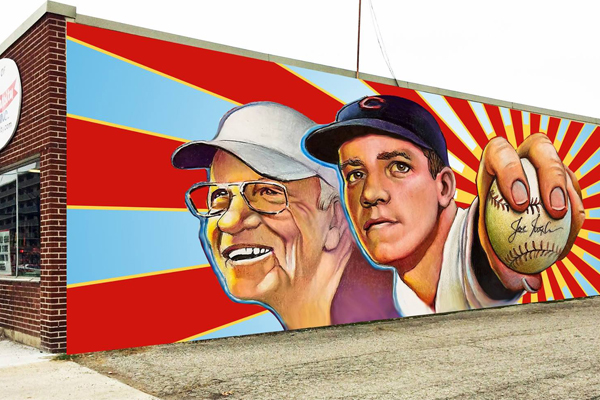 This delicately detailed, colossal composition is meant to evoke feelings of serenity, peace, and fragility among all of those who lay their eyes upon it. The mingling of the birds suggests peace while the lightbulbs bring promises of more innovation and positivity in Hamilton's bright future. This mural was designed by Annie Hamel and painted by Nick Scrimenti. 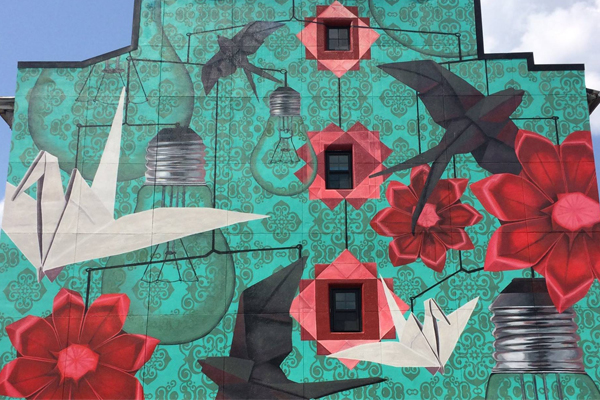 Hey Caddy-O, designed by Nicole Trimble, displays a striking composition of a 1950s Cadillac Coupe de Ville. An incredibly fitting image for the side of an auto and tire shop. The sunbeam color palette paired with the classic car fills viewers with nostalgia every time they pass it. 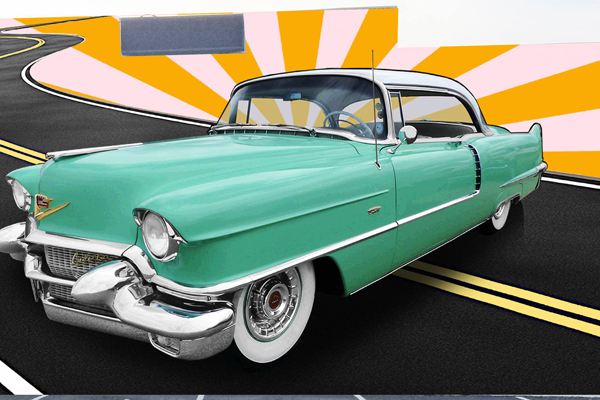 The Golden Ethos composition commands your attention the moment you come across it. This fascinating mural was created by Christian Dallas. Music and art are at the heart and soul of Hamilton. This composition was strategically placed on North Second Tap and Bottle shop. Tunes can always be heard throughout the shop and it’s in close proximity to the RiversEdge Amphitheater. 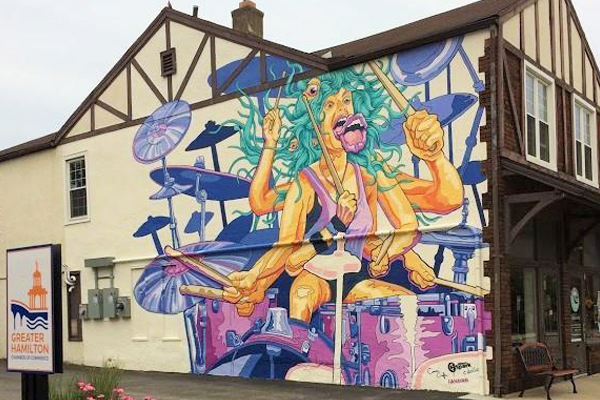 Where to Find it

Don’t just take our word for the magic of the mural. Take a self-guided street art tour, and experience the phenomenon for yourself. (Not to mention, murals make for excellent photos). Your followers will envy you and your mural excursion!