The Butler County Soldiers, Sailors, and Pioneers Monument has an unmistakably stoic and proud presence on Hamilton’s South Monument Avenue. The history and stories that lie within its marble walls and stained-glass windows are immeasurable. It came into fruition to honor the men and women of Butler County who served in the Revolutionary, Indian, Spanish American, 1812, Desert Storm, and Mexican Wars as well as the first settlers of Butler County. 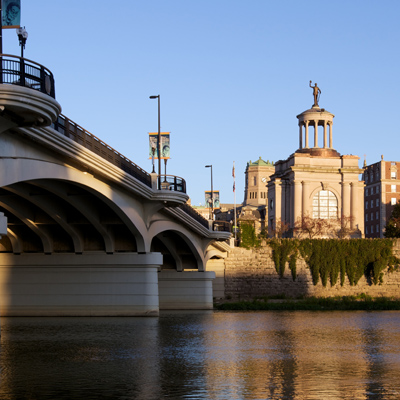 Movers and shakers in the Hamilton area had dreamt of its existence for years. The monument was built in 1902 after a tax levy had passed, allowing the project to be funded with $71,000, which would be $1.9 million in today’s money. It stands on the site of what was formerly Fort Hamilton in the 1700s. Canons created at the West Point Foundry rest outside its entrance. 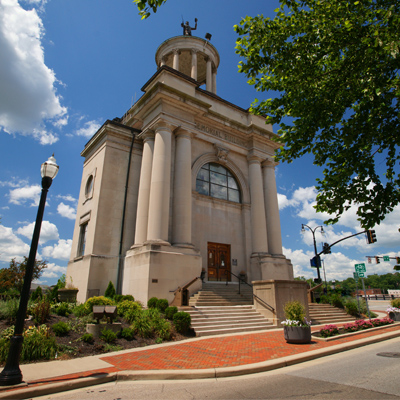 A 17-foot, 3,500 lb statute sits atop the monument; depicting Civil War private Billy Yank. He’s raising his cap in celebration over the Union victory at the Jewel of Soul. His stance above the Great Miami sets a proud and welcoming precedent for those entering downtown Hamilton. The masterpiece was created by sculptor, Rudolph Thiem.

The names of Butler County pioneers and those who served the country are engraved into the thick marble walls. The vastness of it is jarring, 4,500 names beam from the marble. Descendants of their families will forever have this place to visit to honor their memory and contributions to our country. 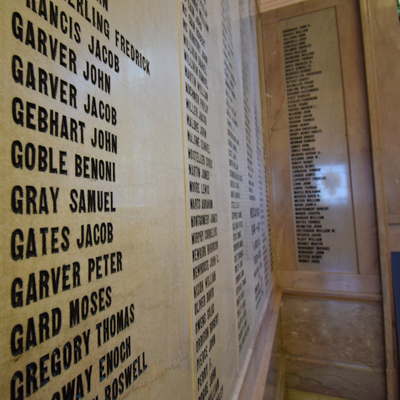 You may recognize a few of the names on the walls. Their imprint on our history is as deep and permanent as their carvings. One being Richard Butler, the county was named after his heroic actions in the Revolutionary War. At the infamous St. Claire’s defeat, he was mortally wounded, with his brothers by his side. He posted up against a tree and told his brothers to leave him there and seek safety, he was later killed by the opposition. It’s important to note that the names of Butler County pioneers are not all encompassing. When the carvings were created, they were chosen based off the 1803 voting rules which excluded women and men who didn’t own property. 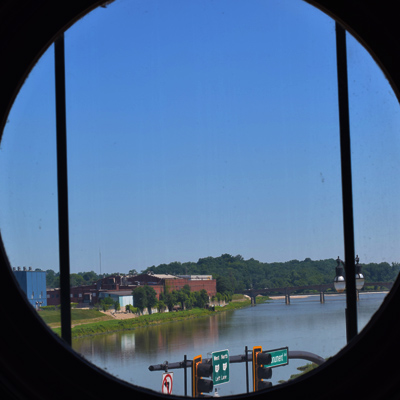 The intricate stained-glassed windows are unreal works of art and the most striking element of the monument. The two on the second floor pay homage to women during wartime and their diligent care for the people around them. 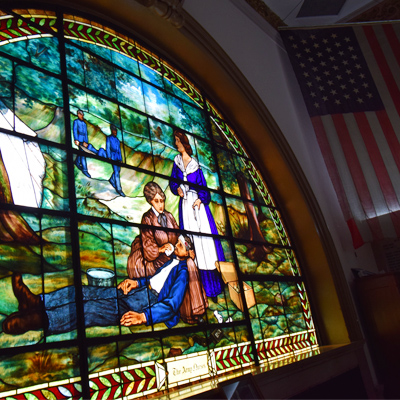 This group is referred to as the Women’s Grief Core. Their resourcefulness was remarkable. The image in the stained-glass depicts them stripping the lint off of sheets to create bandages to cover wounds with. 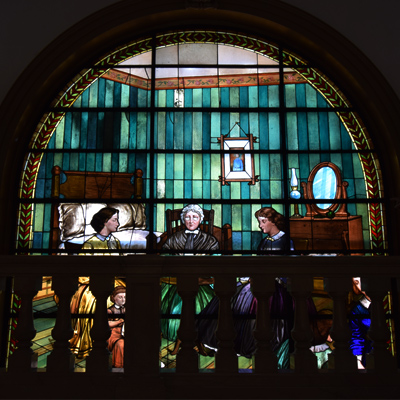 The monument was closed for a number of years for restorations and has recently reopened with veteran Butch Frederick as the curator. Its beauty is boundless, it’s difficult not to feel awestruck and solemn as you hear the histories. The names on the wall are no longer just names after you hear the heroics attached to them.

The Soldiers, Sailors, and Pioneers Monument is available to tour Thursdays, Fridays, and Saturdays 10AM-4PM.

Things to do History Buff Weekends