Meet the artist behind some incredibly cool art around Hamilton, including the new StreetSpark RoBros Mural. 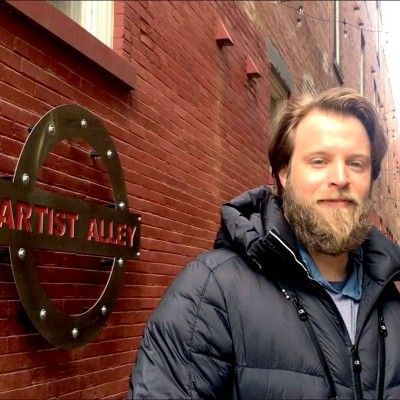 As a a painter, illustrator and digital artist, Logan Walden aims to create a sense of wonder and spiritual connectivity in all of his work. Logan moved to Hamilton, Ohio a little over a year ago and since then, he has been a lead artist on some really cool projects in the area. Most recently, his RoBros Mural design was completed with the StreetSpark program, and he helped to lead The Strauss Market Murals Project. In just one year, Logan has already made a big impact on Hamilton's thriving art scene.

It may be hard to believe seeing his work now, but Logan was not always an artist. As a young adult he worked in creative fields, but never as a painter. However, with his dad being a professional wildlife artist, Logan grew up surrounded by art and creativity.

"As a child my dad taught my brothers and I how to draw and sketch," Logan says. "But when it came to painting I was always nervous because whenever I tried to paint as a child... it was terrible. So I avoided it for awhile."

Before he even thought about a career in art, Logan worked in the film industry. He attended Full Sail University in Florida and received an associates degree in film. Shortly after he graduated he began working on some Indie films as a production assistant. He eventually moved up in the industry and began working on larger projects like Tiger Woods commercials, where he worked with the same crew for awhile. A few years later, Logan decided to pursue his long-time dream of moving to California. 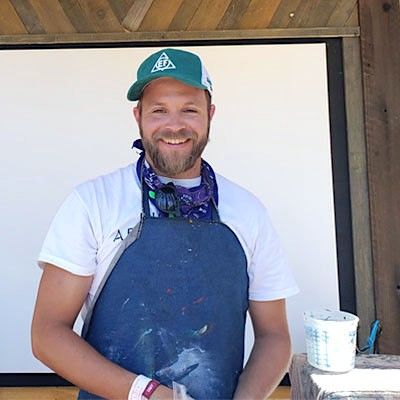 Once he moved out to L.A., he began working on gameshows for the Disney Studio lot, which then led to reality shows. For a few years, Logan worked as a production assistant on the popular reality show series The Bachelor and The Bachelorette.

"Eventually I got tired of all that because I was doing a lot of office work and I wasn't getting to be as creative as I intended on being," He says. "I stopped working at these jobs and did some soul-searching for about eight months."

During these eight months back in 2010, Logan attended a few music festivals including Burning Man, where he was introduced to the transformational music and arts scene. Logan says the music and dancing were fun, but what stood out to him most at these festivals were the live art performances.

"Artists would set up these giant mural walls and just paint throughout the course of the week," he explains. "You would watch this painting develop from the beginning and it was so inspiring. That's really when I decided to take the steps towards being more of an artist." 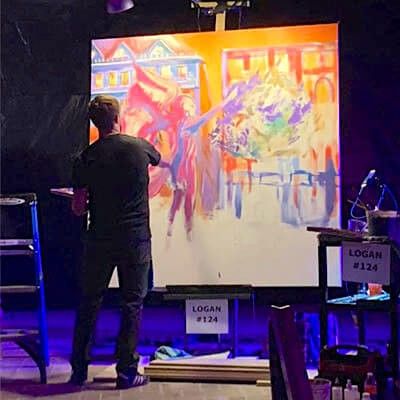 At first, Logan re-entered the film industry as an Art Director and Production Designer for music videos. As he got older and the industry changed, Logan realized he still was not satisfied. He wanted to create his own original art... which led him to move back to his hometown in West Elkton, Ohio in 2012. It was then that he asked for some pointers from his dad, and Logan's journey with art really began.

That year, Logan's dad taught him how to work with acrylic paint and then he started working in different mediums such as digital art and graphic design. He even started painting his own live murals at festivals, just like the ones he had previously been so inspired by. 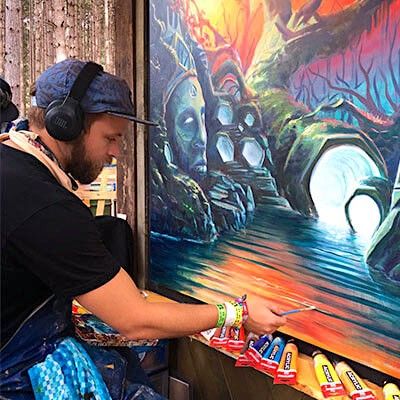 It wasn't until 2019 that Logan moved to Hamilton. He had met a friend and fellow artist in the festival art scene, Joshua Morrow, who also happened to be a resident of Hamilton, living in the Artspace Lofts downtown. He had been encouraging Logan for years to come and check it out.

"I decided to finally come and visit him here. He handed me a DORA cup and we walked around Marcum Park," Logan says. "Then the stars just kind of aligned."

That was the year Logan moved into the Artspace Lofts in Hamilton and thus began his art journey here in Butler County. After becoming a Hamilton resident, he continued to develop his own work and even painted a live mural downtown as a part of the Shift event by InsideOut Studios.

Not long after that, Logan became a part of Hamilton's StreetSpark Art Program both as a designer and lead artist of the RoBros Mural.

Logan's mural was one of StreetSpark's three new murals planned for 2020. StreetSpark is a public art program that was founded to further the creative identity in Hamilton through public art projects. The program creates engagement by producing high quality art, providing opportunities for local artists and enhancing the visual appeal of the city. When new projects and mural spaces are revealed, StreetSpark allows local artists to submit their own designs for the spaces available. Logan had submitted an idea years ago but it did not get accepted.

"This year since I live here in Hamilton now, I am better acquainted with the community and I have perfected my skills and discipline more, so I decided to submit an idea again," Logan explains. "And then my idea for Heaton Street was accepted."

Logan's mural design, RoBros, was accepted for the space available at 802 Heaton St. in Hamilton. 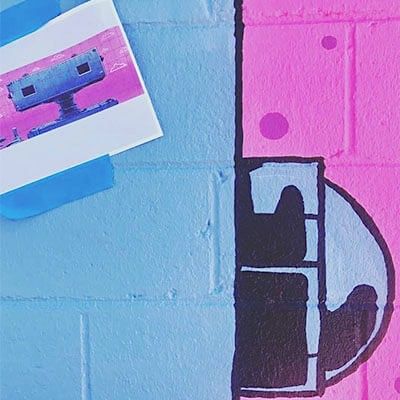 The mural features two larger-than-life robot brothers amidst a vibrant pink sky. The neighborhood where the mural is located has an industrial history and is in a residential area where all ages are present; so the design pays tribute to the area's past, while offering something contemporary and fun for all ages.

Before submitting his RoBros design, Logan drove to each of the three available mural locations before he fully developed his idea.

"I was in the middle of an artist block at the time, so I drove to each location listed on StreetSpark's website and just sat there for a minute," Logan says. "The wall on Heaton St. just resonated with me the most out of the three options." 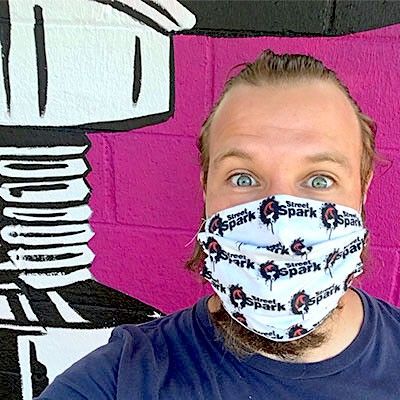 Originally, Logan had planned on doing a design featuring a forest landscape with deer.

"I'm not sure how I went from that to giant robots with a pink sky...but I guess that just happens through the process," Logan laughs.

One of the most unique aspects of Logan's design was his plan to use the building's windows as the robot's eyes. 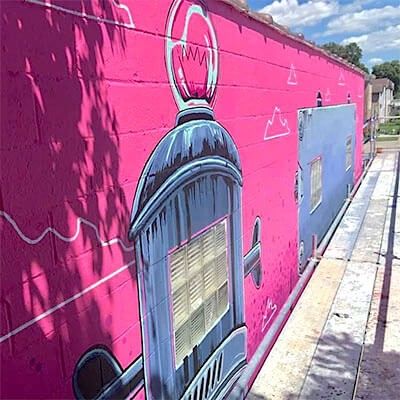 "I can't wait to see that," He says. "At night especially, or when the sun is shining down if there's any light coming through the windows it will look like the robots are just waking up... so that will be pretty cool."

When the time finally came to paint the mural, Logan was accompanied by two supporting artists, Jamie Schorsch and Kinsey Downs, who helped from start to finish. Both Jamie and Kinsey had worked with StreetSpark before so they were able to help Logan with the entire process. Although Logan had experience with many murals before, they were mostly in front of live audiences. The RoBros mural is the largest outdoor mural that he has done so far.

RoBros is the 12th mural to be added to the StreetSpark Program. In addition to Logan's design, StreetSpark is also adding two other murals to Hamilton in the Summer of 2020— Garden Parade will be painted on the wooden fence in Jefferson Park by lead-artist  Lizzy DuQuette, and Garden of Dogs will be painted on the Elite Performance & Wellness building by lead-artist Christian Dallas.

The process for RoBros began at the end of July and took 12 full work days to complete. All together, the mural used approximately 10-12 gallons of paint, plus two coats of varnish. On September 2, 2020 StreetSpark will host a RoBros Dedication event to celebrate Logan, Jamie and Kinsey and their hard-work. 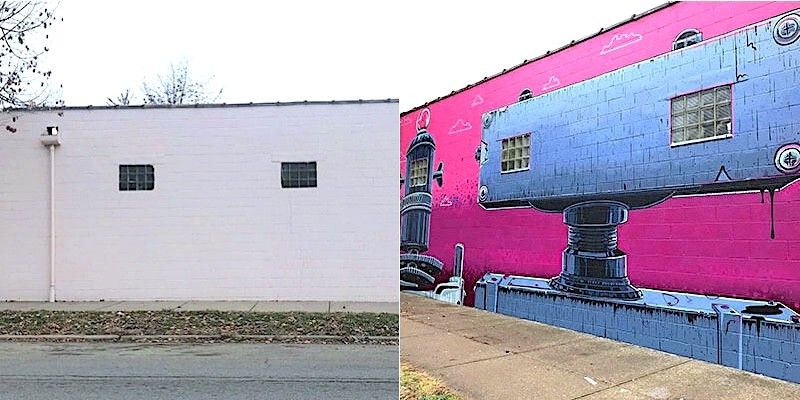 "I hope the mural brightens the environment that it's in and reminds people to have fun, relax, and be playful," Logan says. "I tried to make it as cool as possible for all ages, but I think its for the kids more than anything... I mean what kid doesn't love a giant robot?"

Since moving to Hamilton, Logan also took part in the 2020 Strauss Market Murals. He helped to lead the project along with David Stark and Patrick Davis from the Artspace Lofts. The project transformed into a big Hamilton block party where a group of ten artists took to the walls of the McDulin Parking Garage to create a collection of street art.

Ten different artists with ten different styles— but each mural was painted with the same Obstinate Orange color to reflect the positivity of Hamilton's beautiful sunsets. Along with helping to lead the project, Logan also participated as one of the ten artists. The design behind his mural, Sketchy Pigeon, has it's own unique story. It portrays a large pigeon in the center of the mural, with different aspects of Hamilton reflected throughout. 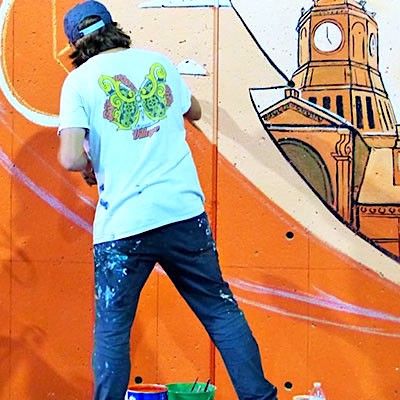 Logan's Artist Statement: "My mural concept is titled Sketchy Pigeon. Its inspiration draws from the historic buildings and their ornate architecture in downtown Hamilton. These inspired shapes cascade toward one of Hamilton’s most prolific occupants; the Pigeon! If you live in Downtown Hamilton, you've shared an unforgettable moment with a pigeon at least once... 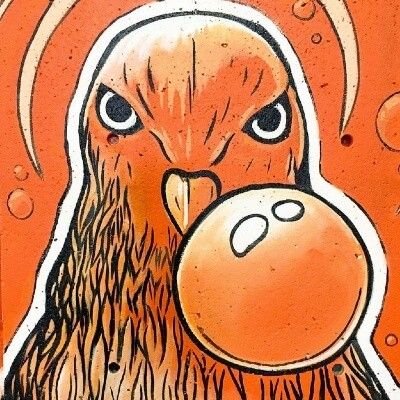 ...Punk-pigeons haven't been the only encounter I've had since moving to Downton Hamilton. There are lots of kids riding bikes, skateboarding, and playing in the parks and streets here. Once, I was walking my dog and was hit by a rogue snowball hailed from a young man from the top of the parking garage. At first, I thought, "that little punk," but then I thought... "that was cool," so in the right top corner of my mural I've illustrated the young snowball flinger, perched with his other punk-pigeon friends on top of the parking garage, in effort to culminate the mural's location and those who spend the most time around it.

I love living in Downtown Hamilton and am honored to be working on another mural in this town. It's a great community of all sorts of people... and pigeons," — Logan Walden 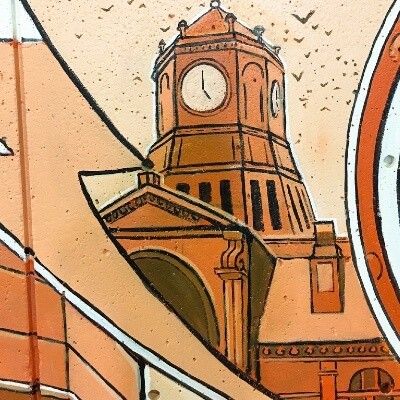 The collection of murals all together are really an amazing sight. Each piece stands on it's own and the meaning can be interpreted differently from person to person. However, when looked at together as a sequence from left to right... a story can be told. 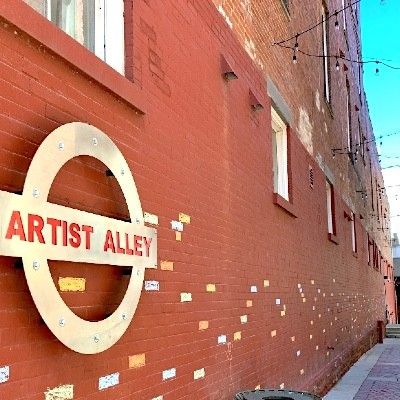 These collection of murals can be seen on the walls of the McDulin Garage in Hamilton. You can take the path through Rotary Park down to the garage, or through the Artspace Lofts' new Artist Alley, which will lead you directly to the Strauss/Market Murals.

Check Out More of Logan's Work

Along with his public outdoor murals in Hamilton, Logan has also created a number of indoor murals including murals inside of homes. Logan's art goes way beyond his murals and paintings too.

"I do a lot of graphic design, I'm in the process of writing a graphic novel and I do a lot of digital work as well. It's a good mix of everything," Logan says.

In one word, Logan says he would describe his style as ethereal. 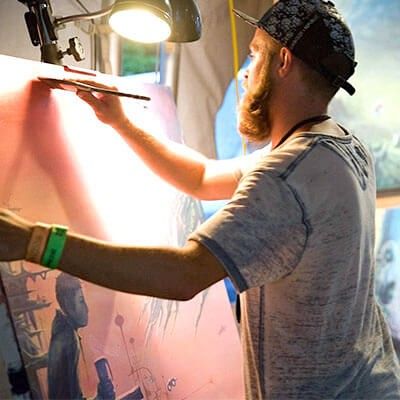 "I really try to capture a spiritual sense of science-fiction and fantasy, where there is this sense of wonder, beauty and darkness in everything. I try to create a balance of that, and I think that's what really inspires me; wanting to explore both inward and outward into the universe and discovering what really matters."

Stay tuned for more work by Logan & check out his pages below!

** All Photos Credited to Logan Walden Art and the StreetSpark Program **