That was the main goal for both Allyson Moore and Kelly Armstrong when they each started their own business; Allyson with her allergy friendly, gluten-free bakery and Kelly with her organic, vegan hummus.  With the same mission in mind, Allyson's Chubby Bunny Bakery and Kelly's Chickpea Chicks Hummus teamed up to open their first retail location in Hamilton. Both make all of their products vegan, gluten-free, dairy-free and organic— making them a perfect duo!

Allyson Moore was not always the Baker Bunny. Although she always loved to bake, she never thought she would do it for a living. Before her baking days, she actually worked as a esthetician, but suffered from multiple health issues for most of her life. Doctors could never pinpoint what was wrong with her, until finally one doctor decided to do an full allergen panel. "It lit up like a Christmas tree," Allyson says. 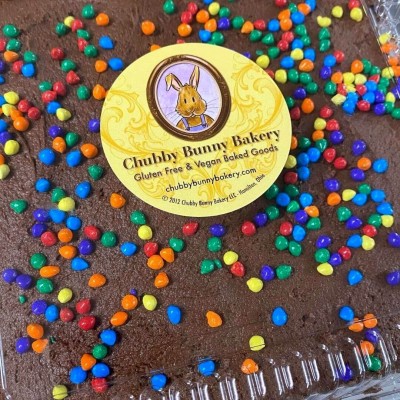 She discovered that she was allergic to gluten, dairy, egg, beef, olive, corn and tapioca. Allyson immediately quit any food that included those ingredients, but with a corn and tapioca allergy, that already knocked out a lot of the gluten-free products on the market. "It was really hard to eat that way. I would go to the grocery store and be there for hours reading the back labels of everything," she explains.

Allyson then began her journey seeking out new ways to make meals that she could enjoy. She started with a lot of her own research, taking regular recipes and modifying the ingredients. She soon figured out how to make things not only for herself, but baked goods that her family loved as well. Her mom encouraged her to sell them, saying there had to be other people with the same allergies. 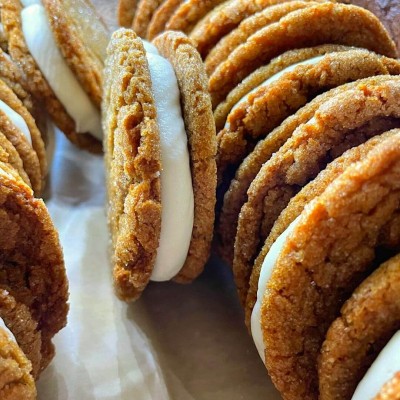 "I hadn't met any of these people, but after starting Chubby Bunny, I have been introduced to so many people who have the same problems that I was struggling with," Allyson says. 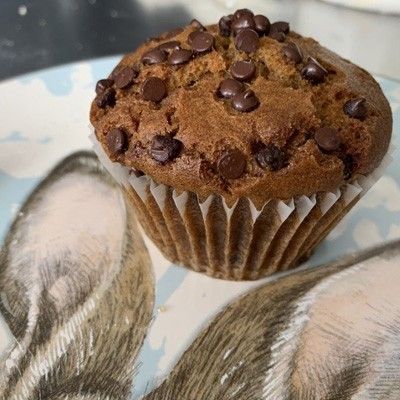 Starting out, Allyson made everything out of her home kitchen and sold her products at the Oxford Farmers Market. After a successful summer there, she moved to selling her products at Moon Co-Op and Jungle Jim's Market where her products became really popular. She would often bake all night to restock the shelves at both stores.

"Looking back, it’s hard to believe that I produced as much product as I did from our home kitchen," she says. "I quickly outgrew that and we moved into Findlay Kitchen, which was an amazing learning experience." 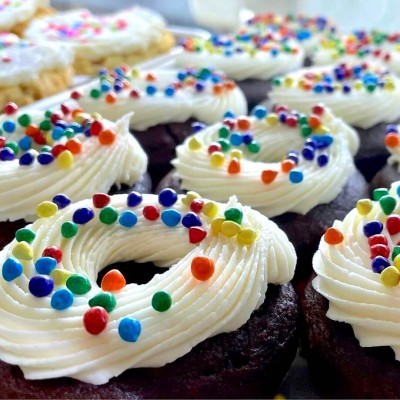 Allyson worked out of Findlay Kitchen for a little over a year before deciding to open up a storefront bakery. Customers always expressed how nice it would be for Allyson to have her own location. The Chubby Bunny Bakery has it all; cupcakes, cookie sandwiches, donuts, muffins, and more. There's a ton of original flavors or fun flavors to choose from. 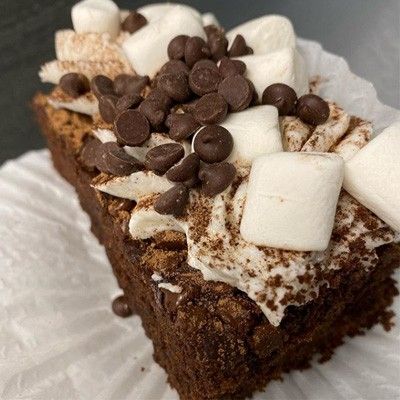 A personal favorite has been the Hot Chocolate Brownie which is absolutely delicious! The best part about Chubby Bunny is you don't have to have these allergies to fall in love with the baked goods, because there's no sacrifice in taste or sweetness. Everything is certified vegan, made gluten, egg, dairy, nut FREE, and delicious!

Kelly Armstrong, the "Chickpea Chick" started making hummus in the 90's as a go-to snack food. "I really started making hummus to take to parties as a survival food for me as a vegetarian," Kelly says. She has been vegetarian since 1987, and party snacks usually consisted of salami rolls and buffalo chicken dip, so she waned a snack food that she and others could enjoy. 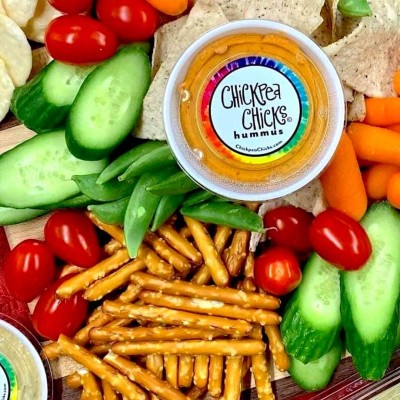 At the time, Kelly worked as a graphic designer and her creative side was always thinking of new projects to take on. The idea for Chickpea Chicks Hummus started in 2015 during a brainstorming session. "A college friend and I always liked doing projects together and one night we were just brainstorming new ideas," Kelly explained. "I had made hummus for us to brainstorm over, and she said what if we made hummus?"

Originally Kelly wasn't excited about the idea, until that same friend took her on a trip to the Oxford Farmers Market. There was an opportunity to start right away, so she decided to start making hummus to sell. Kelly ended up giving up her 20 year career as a graphic designer to start up her hummus business. 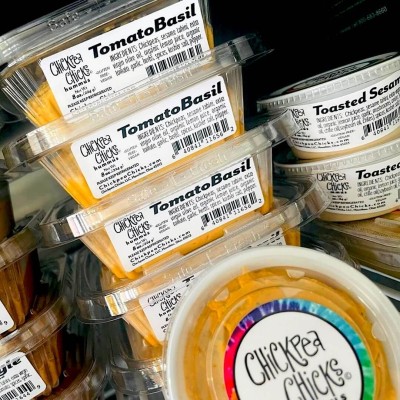 Chickpea Chicks started out with two staple flavors— Lemon Zowie and Smokin'— which soon jumped up to five. Now, Kelly sells her Lemon Zowie, Smokin', Toasted Sesame, Cincy Style, and Wasabi Green Onion in additional to seasonal blends. Each one is made with zero preservatives and is gluten-free, dairy-free and vegan. Seasonal flavors, like the Pumpkin Curry, were always top sellers at the Oxford Farmers Market. While selling there, Kelly met Allyson and the two soon became good friends. 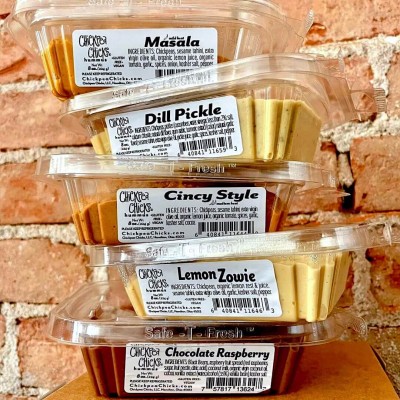 "Hummus is just so versatile," Kelly says. "I cook with it beyond just dipping. I'll use the Cincy Style in my grilled cheese to spice it up, or in my red sauce for pasta. There's a lot of other options."

Kelly even posts different recipes on her website where you can use Chickpea Chicks Hummus as an ingredient. Cincy Style is a great blend to use for pasta because it brings that Cincinnati chili taste without the meat. If you're really into spicing up your meals, she has a great recipe for Wasabi Green Onion Redskin Mash. 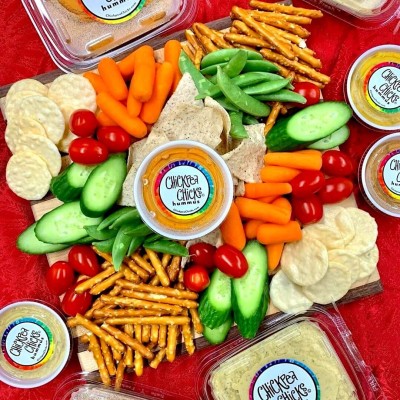 Alongside the Oxford Farmer's Market, Chickpea Chicks got into Dorothy Lane, Jungle Jim's Market, and Alexander's Market to sell their products. To make all of the orders, Kelly was renting kitchen space at the YWCA in Hamilton. "They were really supportive of me working out of there. Eventually they were talking about renovating the kitchen space, so I started looking for other spaces I could move into," Kelly explains. "That's when Allyson mentioned us teaming up, because we both have the same value in our products."

With both Kelly and Allyson looking for a new space, the timing could not have worked out better. Once Allyson found the space on Main Street she approached Kelly about teaming up together. "We always bounced ideas off each other and did events together, so it just made sense," Allyson says.

Although the timing was perfect, the building was not in great shape. When they bought the space, it was completely dilapidated. The building was old, run down, and you could even see through the ceilings. Regardless, Allyson saw the potential. "Right when I walked in this space, I knew that this was it," she says. 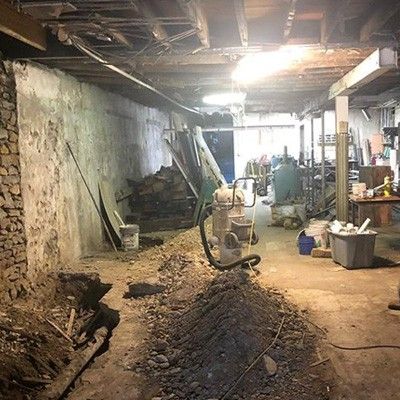 In total, the renovations and structural repair took about a year. It was hard work followed by painting, decorating, tiling the floors and then moving in — transporting Chubby Bunny's 1000lb. oven alone was a big job. The work was all worth it, adding some new flair to Hamilton's Main St. 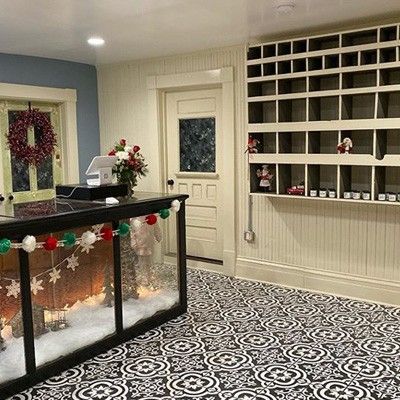 Stop by to order a custom cake, create your own assortment of gluten-free desserts, and while you're there try some of the fresh hummus. Kelly's hummus comes in two sizes — a 3oz. that is a great for sampling (and lunches!) or the full 8oz. which is perfect for sharing. The shop even has coffee, gluten-free chips and pretzels...and even locally made vegan candles! 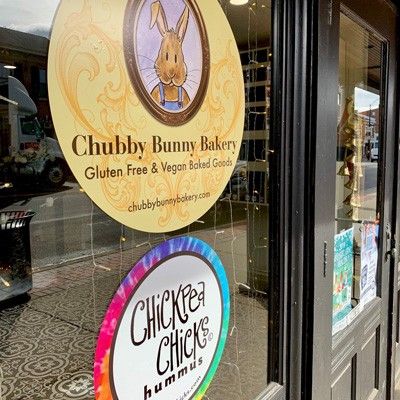