The Donut Dude is the newest addition to the Donut Trail, bringing this sweet adventure to a baker's dozen!

The Butler County Donut Trail just got even sweeter with the addition of one more shop — The Donut Dude! This donut shop in Liberty Township brings the Trail to a total of 13 different stops. Get your passport ready, visit each shop and earn your T-shirt.

Do you dare to donut? Download Your Passport Here! 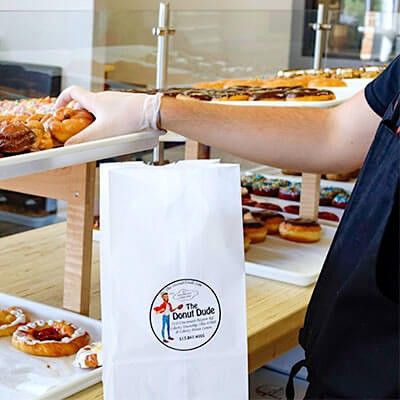 Who is the Donut Dude?

This donut shop is not only new to the trail, but new to Butler County all together. Glen Huey and his wife Laurie just opened their shop this past March, although Glen says he's been a huge fan of donuts all his life. It wasn't until only a few years ago when Glen decided he wanted to take his love for donuts to a whole new level. 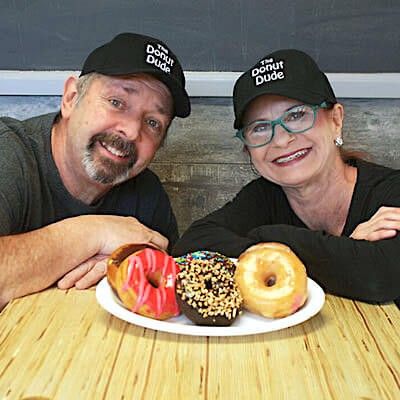 For over 15 years, Glen worked as a woodworker in his own shop in West Chester. It just so happened that his shop was located right behind Stan the Donut Man, another stop along the Donut Trail. "I'd come out of my office everyday at 5pm and say, Wow that smells good," says Glen. "I didn't know at the time, but he was actually in there making the donuts for the next day."

Glen says that he has always been a fan of donuts, but it was the daily smell of fresh donuts that really pulled him in. It was about 3-4 years ago when Glen finally decided he wanted to learn more. 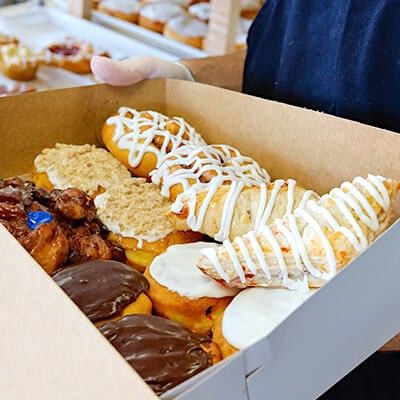 "The idea for opening a shop wasn't even there, I just wanted to learn," explains Glen. "I wanted to know the science, the intricate stuff behind making donuts."

His curiosity and willingness to learn led him to get a job at Holtman's Donuts in West Chester, where he worked for 18 months learning all about donuts and enjoying ta new adventure along the way. "I was there just having fun and learning everything I could," he says.

For as long as Glen can remember, he has always been an entrepreneur and owned his own businesses most of his life. About 8 months into working at Holtman's, he told his wife he thought he could really make his own business out of donuts. 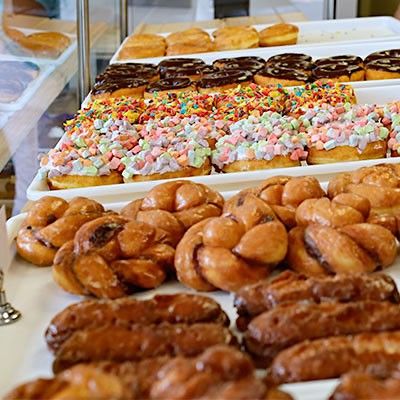 What most people don't realize is just how much science and detailed processes go into making good donuts. "I always used to tell people in woodworking that there isn't a day that goes by where I don't learn something new...and it's the same thing here," Glen says.

It wasn't long before Glen did his research and came to Laurie with a plan — and he was fully prepared with spreadsheets, facts and figures. "I thought it was a little on the wild side at first, but Glen really did his homework," Laurie says. "We decided to give it a whirl." 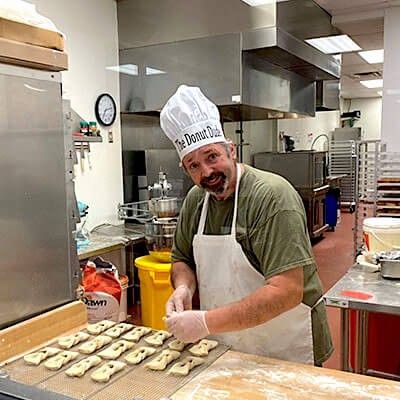 And so, the couple began their new adventure, renting out a space in Liberty Township and setting up The Donut Dude. Before opening, both Glen and Laurie spent a lot of time testing out donuts and putting in hard work to get their shop together. With his woodworking background, Glen made all of the furniture for the shop by himself, and the couple sanded all of the floors together. After a few months and some more hard work... The Donut Dude officially opened on March 20th, 2020.

The biggest adjustment for Glen and Laurie so far has been the change in their schedules, especially their sleeping schedules. Glen usually comes in to the shop after midnight, and Laurie catches a little extra sleep before coming in at 2 in the morning to help prepare the donuts for the day... but it's all worth it for the incredible selection that The Donut Dude offers.

From the classics like danishes, jelly-filled and sprinkled all the way to creative combinations like peanut-butter and jelly, key lime pie and caramel apple — the donuts at The Donut Dude are always fresh, fun and delicious. 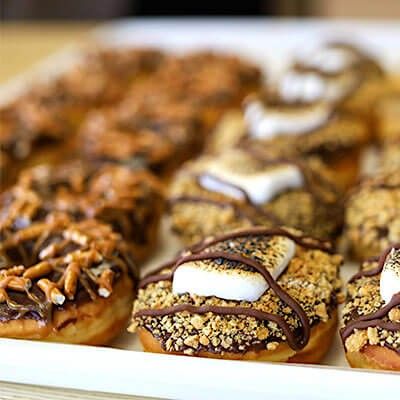 Above you can see their S'mores Donut and their Turtle Donut; made with pretzels instead of pecans in their effort to be Tree Nut Free. Glen and Laurie say they are also planning on working to get a vegan donut on the menu to be more inclusive for their customers.

You'll see another creative Donut Dude special below... The Stroopwafel. 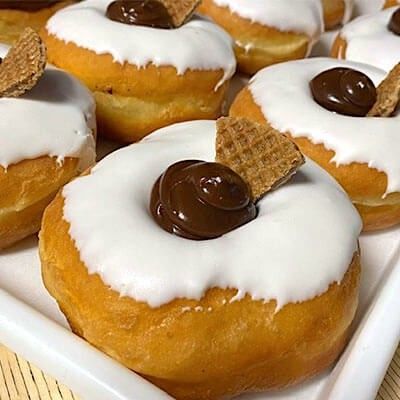 This idea came from the Dutch classic of soft-toasted waffles with a creamy caramel filling. The donut included  a piece of Stroopwafel plunged into chocolate Bavarian cream and finished off with white icing.

Another customer favorite is the Cereal Donuts, topped with popular cereals like Fruity Pebbles or Lucky Charms marshmallows. 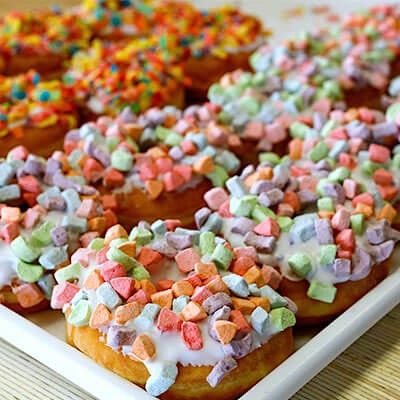 "Being an old man, I like the old man donuts," Glen jokes. "I like the kettle danishes or donut sticks...the more simplistic donuts from back in the day.

"My favorites are the apple fritters and fried croissants," adds Laurie. "And I like our custard and raspberry jelly-filled." 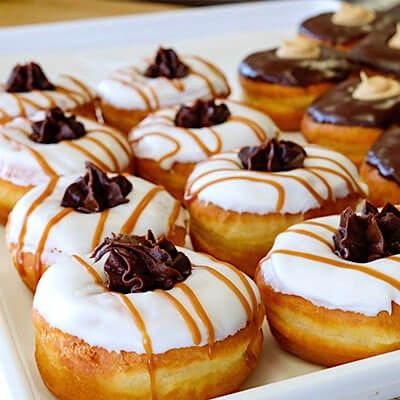 Glen agrees that Laurie's favorites are the more popular among customers; especially the apple fritters and fried croissants. Most people usually have questions about the fried croissants before giving them a try.

"I tell them to just try it once and if they don't like it they can come back and I'll give them something else," Laurie says. "But they never come back to switch... because they're delicious!"

Since opening a few months ago, The Donut Dude already has some big plans and ideas in the works, including rolling out their monthly charity donuts. The idea is to offer specially decorated charity donuts where a portion of the proceeds will go to different charities in the community. Glen and Laurie say the charities they work with will all have a special connection to them — like Animal Friends Humane Society in Hamilton, Ruth Lyons Children's Fund, Reach Out Lakota, and more.

"It's a way to give back. My main goal is for people to think of this as their community donut shop," Glen says. 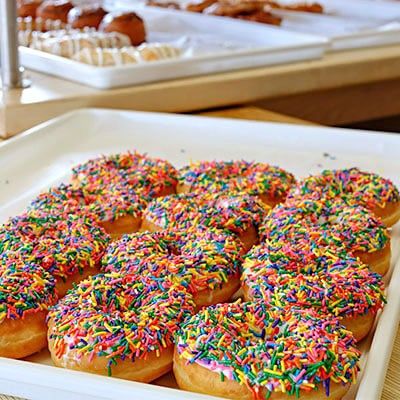 Glen says he also plans on bringing in local artists to do murals on the big chalkboard at the front of The Donut Dude shop, having a karaoke machine some mornings, and really just bringing a fun, lively environment for people to enjoy. And one thing is for sure — Glen and Laurie both agree that the best part of this new journey has been getting to know their customers and community.

“I enjoy talking and having a good time, so I just love standing out there and getting to know the customers, it’s perfect for me," Glen says. "This is the perfect job for me.” 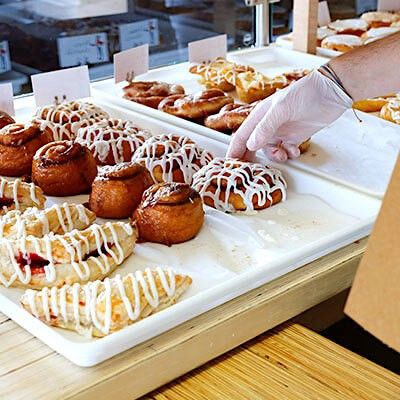 The Donut Dude — Newly Added to the Donut Trail! Download Your Passport Here.