There's a new bar in town... where you can find the top-rated pinball machines of all time! 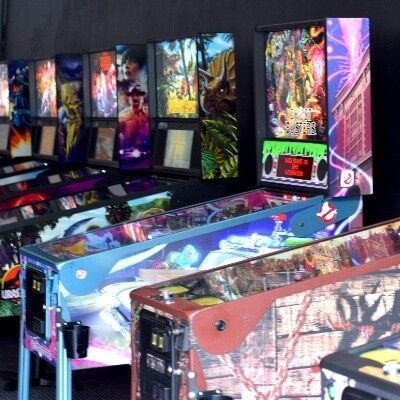 Eat, drink and play pinball. The Pinball Garage has the vibe of a sports bar— offering food and a full bar— with the addition of 30 pinball machines that are among the 50 top-rated pinball games of all time... including Medieval Madness, the #1 rated machine. A successful journey that started on the popular show Shark Tank led the owner Brad Baker to Hamilton where this new business is the storefront of his virtual pinball manufacturing warehouse.

From Shark Tank to Success

Before his Shark Tank tale, Brad and his company VPCabs helped pioneer the technology behind digital pinball machines. Virtual Pinball allows people to play any pinball game ever made, all on one machine. His brother, who owns several popular arcades in the Cincinnati area, first introduced Brad to the idea and it developed from there.

Coming from his own audio-video business, Brad started making virtual pinball machines to put in his brother's arcades. It wasn't long before other companies started asking him to make more and the business really took off. Brad applied to be on Shark Tank twice and he was accepted the second time; he appeared on Episode 28 of Season Seven.

"It's about six months of interviews," Brad explains. "The show gets about 100,000 applicants every year and they only tape about 175 of them." 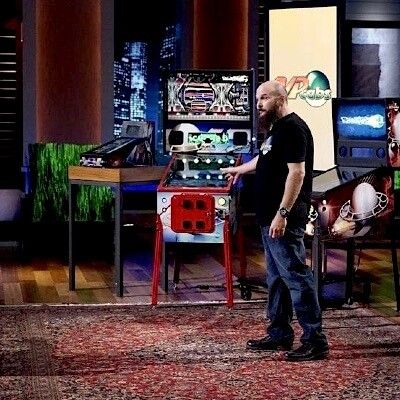 He says the entire experience was wild, and nothing other than his business pitch was rehearsed.

"I was the first person of the day because my machines were so big that they had to set them up first," Brad says. "I ended up making a deal with Daymond, and after our deal officially closed, we ended up becoming pretty good friends."

As a native of the Hamilton and Fairfield area, Brad began manufacturing his virtual pinball machines in Fairfield four years ago, and then realized his growing company was in need of a larger space. 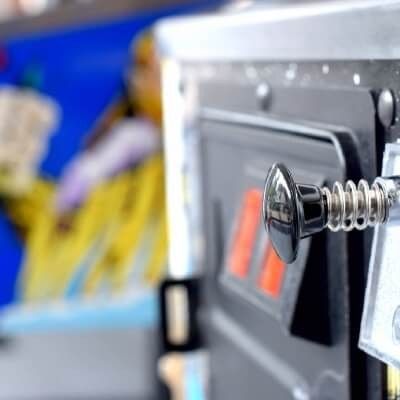 When he decided to move his warehouse to Hamilton, Brad had no intentions of opening up a bar. He bought a building on Main St. which was most recently occupied by Jim's Auto Service Store, so there was a large storefront to the warehouse. With so many other successful businesses opening in the area, Brad's friends and the City of Hamilton urged him to consider opening a pinball arcade, bar or restaurant in the front of the building.

The game of Pinball is more popular than people may think it is. After dying out in the early 2000s, it made a huge comeback within the last ten years. "It's more popular now than it was in it's heyday back in the 80s," Brad says.

The Pinball Garage features all mechanical pinball machines; some of which were newly made by VPCabs, while others date back to the 90s. Among the 30 different games offered, they are all rated in the Top 50 in the world. Each machine is different, offering popular titles from Batman, Iron Maiden, Jurassic Park, Pirates of the Caribbean, The Simpsons, Star Wars, Stranger Things, and many more. 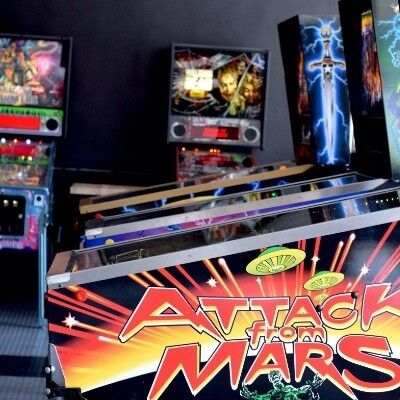 "We've already had people come from more than six hours away to play this game, which is pretty cool," Brad says. 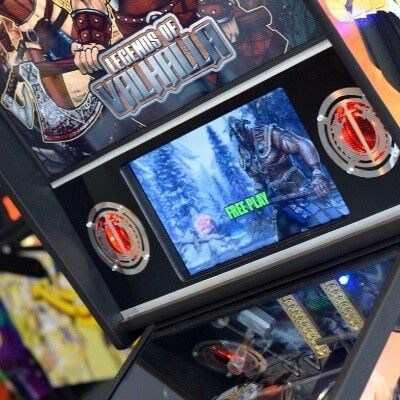 New machines can be very expensive to purchase and it's common for pinball machines to break regularly. Luckily, with Brad's manufacturing company right out back, their machines can be fixed quickly compared to other arcades. It was important to Brad that the arcade make a good impression and carry the most popular, high-quality machines available.

At Pinball Garage each machine requires anywhere from 2-4 tokens to play, so they offer a few different token packages for customers to purchase.

"We actually sell this really retro, rad fanny pack with our logo on it that's filled with $60 worth of tokens, and you can get it for $50," Brad says. "People go wild over these." 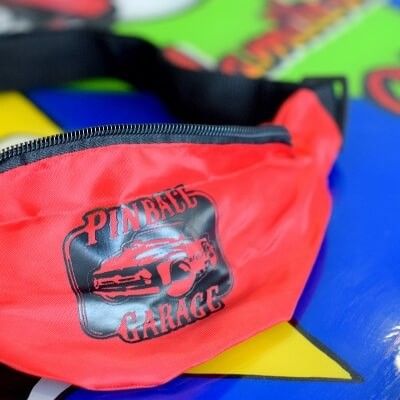 There are big plans for the future as well, as Brad has a Phase 2 of Pinball Garage in the works. This will include additional seating, expanding the bar, installing more big-screen TVs, and offering a larger variety of both new and old pinball machines.

"We want to attract the hardcore gamers, as well as just regular people who want to come in and have a great time," he says.

It's easy to see there is a lot of Hamilton pride throughout Pinball Garage. Brad does a great job of collaborating with other local businesses and sharing the local love through food, drinks and decor.

Of course, a great game of pinball wouldn't be complete without perfectly themed drinks. Brad's daughter-in-law, a former mixologist at The Roosevelt Room, helped to create a full menu of creative craft-cocktails.

The drinks shown below are the Pin-Bomb, a hard seltzer cocktail that tastes just like a Bomb Pop, the Slingshot Rita, a fresh margarita with a Pinball Garage spin, and the Wizard Tea, a green tea flavor with an adult twist. 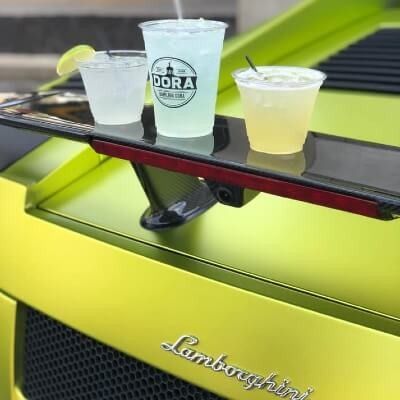 Along with a variety of special bourbons and a full bar, they also offer 24 draft beers, one of which is a non-alcoholic draft root beer.

"It's great for families and I say it's for kids, but adults drink it too," Brad says. "It's really similar to the old-school, handmade root beer from Jolly's." 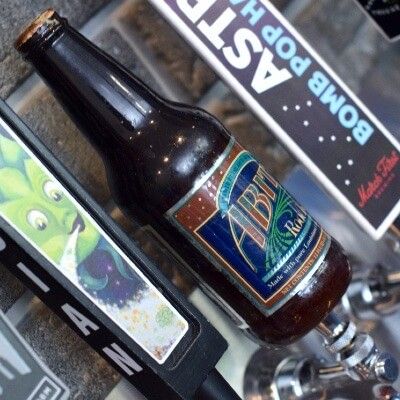 In addition to drinks and local beers, Pinball Garage is also partnered up with the owners at All8Up Pizza & Hoagies to deliver food to customers while they play.

"It's really awesome food. I have to say they're known best for their calzones and hoagies," Brad says. 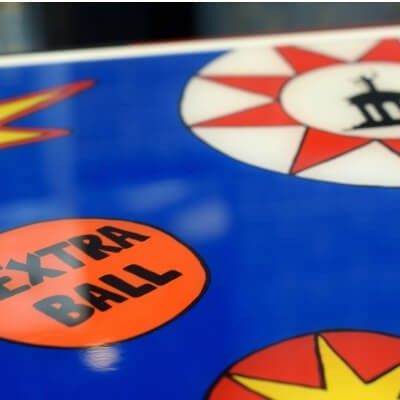 You can even see a bit of Hamilton right on the top of the bar that features a large work of art by local Hamilton artist, Lori Kay Farr, who also teaches art at the Fitton Center for Creative Arts.

As the game of pinball continues to grow in popularity, the Pinball Garage becomes more of a desired destination. To experience the renaissance for yourself, make sure to put this place at the top of your list! 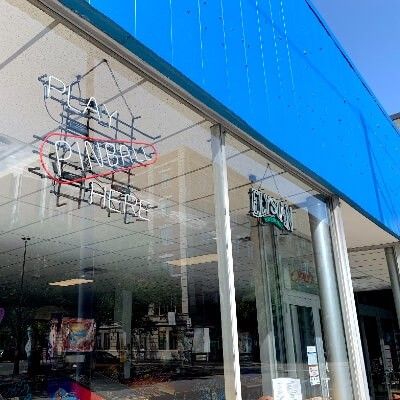 New & Noteworthy Things to do